Since 1987 Bill Bentley has been producing  industry quality recordings for demos, albums, film and TV , and web projects heard around the world. Relocated from L.A. in 1994, he specializes in helping singer-songwriters, vocalists, and  full bands realize their recording dreams with reasonable rates, highly efficient production techniques and a passion for quality sound.

"I understand how personal and important songs are to the artist. It is in this unique philosophy of care and support for the song itself, that makes all the difference. Even if  you only have a basic idea for a song, I can help bring your dream into focus by filling in the blanks, and adding all my years of experience and success into your final product." 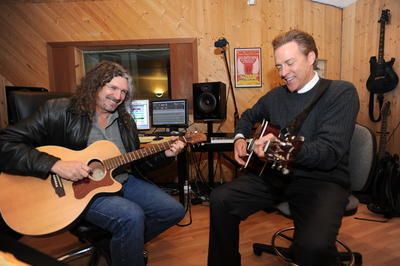 
The image most Bay Area TV viewers have of ABC7 anchorman Dan Ashley is one of boyish, Ken-doll looks -- a strait-laced, dapper suit-and-tie kind of guy beaming from the screen, every hair perfectly in place.

So the sight of Ashley -- clad in a T-shirt and grungy jeans -- on stage with a rock 'n' roll band and screaming out the Rolling Stones' "Jumpin' Jack Flash" can be rather jarring, or even "weird," as one woman put it after witnessing such a scene at Concord's Todos Santos Plaza.

For the record, Ashley is enjoying it. Thoroughly. His new side gig as lead vocalist for Push, a classic rock band made up of part-time Bay Area musicians, is a boisterous exercise in wish fulfillment.

"Whenever I've attended concerts, I've always thought about what a blast it must be to be up on that stage," says Ashley during a break from a quick guitar lesson with music producer Bill Bentley at Bentley's Concord recording studio. "It's really fun to be able to entertain people and entertain ourselves, frankly. Plus, I'm not Bono. People don't expect a lot, so that helps."

The chance to unleash his inner rocker came unexpectedly. In September of 2010, Push was performing at Ashley's annual charity golf tournament when the band prodded him to join them for a song. Ashley, who had just started taking singing lessons,
Advertisement
did so with only a pinch of reluctance.

"We started rehearsing and one thing led to another," says Ashley, who will appear with Push at the first Walnut Creek On Ice Gala Jan. 14.

Bentley says he was surprised at how fast Ashley has been able to morph into rock 'n' roll mode.

"He took up the guitar only six months ago, but he pulls it off (on stage)," says Bentley. "He's the guy in high school ruining all the stats when the teacher grades tests on a curve. He's the one you hate."

That kind of learn-on-the-fly adaptability has aided Ashley in the TV news business, which has changed dramatically since he launched his career 25 years ago.

"When I started, there was no CNN, no 24-hour cable news, no Internet, no tweeting, none of this stuff," he recalls. "It's a much different environment, and it's a little bit harder to cut through all the noise now."

"I'm writing because there is something I feel is important I'd like to share with you. I've worked with George Massenberg (ala Linda Ronstadt) and Tony Berg of Geffen records doing projects in the past, and many other sessions with different engineers and producers but never enjoyed working with anyone like you. You are fast, exceptionally smart, efficient, creative and just a great guy to work with, and I often reflect on the time we did the private sessions for my CD, short as they were. I thank you for the great job and hope one day we'll get together again."


"I have worked with Bill on several voice over projects and have always been very impressed with the results. His studio in Concord, CA is modern and comfortable, and he makes clients feel at ease behind the microphone. In addition, he works very hard to meet his clients' unique needs and technical requirements. On top of it all, his rates are reasonable and he's a fun guy to work with!"
Service Category: Voice over
Year first hired: 2009 (hired more than once)
Top Qualities: Expert, Good Value, On Time

As a singer-songwriter new to the East Bay area, I was in search of a recording studio, a band, and a producer. I found them all in Bill. To say he is amazing is truly understating his talent and experience. He is a rare musician/singer/recording engineer/arranger/producer who listens to an embryo of a song and builds it piece-by-delicious piece into a complete musical and lyrical experience. And he does it all quickly and affordably. Above all, he respects the song and the singer.

I have recorded and performed all over the world with some world-class musicians and producers. I am in awe of Bill -- his talent and his experience. Do yourself a favor -- check out his studio and listen to some of the tracks he's produced. Your songs deserve it!


I needed an affordable recording studio. I needed someone who could bring two tricky radio spots to life. And I needed it all now. From the first conversation on the phone until the project was a wrap, Bill was positively amazing and made every other studio experience I've had seem pale by comparison.

The studio facilities are excellent, and can accomodate a single person doing a voice over to a full band laying down tracks. His experience and keen insights brought out the best possible reads from me and when it came time to sweeten the spots, Bill worked his magic with sound effects. He then blew me away when he started playing the keyboard, then grabbed his guitars, shakers, and bass and created an astounding pair of soundtracks for the spots.

Bill is a brilliant engineer and hyper-talented session musician. I highly recommend him to anyone looking for top-shelf audio solutions - from creating great radio to recording music and vocals, you simply cannot go wrong when you're working with Bill Bentley Productions!

When designing e-learning with voice-over narration, TechProse knows that sound quality is just as important as overall module design. That's why we were so pleased to find Bill Bentley, a sound engineer and producer who runs Bill Bentley Productions in Concord, CA, just minutes from our company headquarters.

A longtime recording professional who works with a diverse group of musicians and artists, Bentley recorded the TechProse team's voice-over talent for a three-part e-learning course and easily met the team's aggressive deadlines.

His knowledge of voice over and recording techniques have proved invaluable to TechProse and our training audience.

CONCORD — The cancer wrapped itself around Kurtis Shaver's vocal cords like ivy on a garden trellis. That the 41-year-old husband and father had just been diagnosed with thyroid cancer was bad enough news. But being a singer in two cover bands as well as in the middle of recording a dream solo album made it devastating. People described him as having a vocal range similar to that of Sebastian Bach — the lead singer of the 1980s metal band Skid Row, known for his reach-for-the-heavens vocal abilities. One nick of the scalpel during tumor-removal surgery and Shaver would never be able to sing again.
Many would have given up the album at that point, especially since some of the songs hadn't been written yet. But not Bill Bentley, of Bill Bentley Productions on Franquette Avenue in Concord. Bentley, who has worked in recording studios since the 1970s, decided this cancer wasn't going to get in the way of Shaver's album. The pair had two months to finish nine original tracks before Shaver had surgery last July. "I just wanted to get these songs in the can before the surgery," Shaver said while sitting in Bentley's studio Wednesday morning. "I said, if this is the last thing I do, I'm going to finish this record."
Fortunately, the surgery went well; Shaver is cancer-free and his singing is better than ever. Looking back on the recording experience, he and Bentley talk about how calm he was. He'd learned to cope with illness as a kid, with a mother who suffered from multiple sclerosis. "I don't know how he functioned the way he did, knowing he had this cancer," Bentley said. "I mean, you're a singer, and you have this cancer that could take away your voice — how do you cope? And he was like, 'Well, what choice do I have?'"
Bentley grew up in Lafayette, and as a toddler, he would sing "Raindrops Keep Falling on my Head" while sitting on the countertop near his mom. He never doubted he'd be a musician. But he quickly learned that he liked being behind the scenes, helping coax talent out of other musicians. He spent a few years in Los Angeles, but he missed the Bay Area. He's had his Concord studio for 10 years, and quietly promotes the arts. He offers teaching space to struggling music teachers and recently bankrolled an album showcasing Contra Costa songwriters — the CD is available at www.ccsongs.com.
But mostly, Bentley said he loves helping "his dudes." Shaver is one of his dudes.
"Both of my cover bands had recorded demos with Bill and then one day I was telling him I wanted to do on my own CD, but had no songs written," Shaver said. "He told me that we'd do it together. People should know that if they have a dream do to something like this, they can come in and he'll help." Not all moments in the studio are heavy, with talk of cancer and nearly-squashed dreams. "The tube went out on this thing, dude," Bentley says. "Aw, man, that was my favorite microphone," says Shaver. They're just two guys who really click. On Wednesday, Bentley played music from another client for Shaver.
"Oh man, that is so cool — that is so 'Yes'-ish," Shaver said, referring to the 1980s band. It's a kind of musician shorthand, and Bentley understands exactly what he means by it.
To hear Shaver's music, go to www.myspace.com/thkurtis. His album is also available at CDbaby.com. To contact Bentley, call 925-827-2763.